Your hair is an important part of your image. Making an informed decision on which provider to choose for your scalp micropigmentation hair restoration can have far-reaching implications. There are some critical points to take into consideration when considering a hair replication procedure. 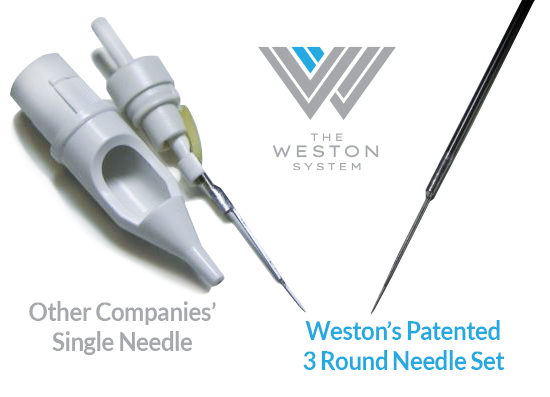 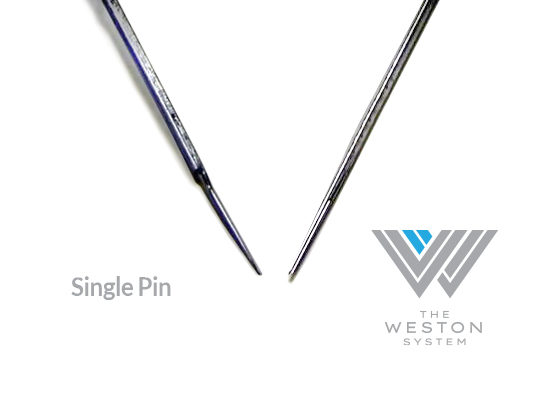 The above photos give a clear example of why Weston’s needles are far superior. While single needles imprint a very small point, they don’t have the ability to retain enough pigment being implanted into the skin to make a lasting replicated follicle. This is why other providers require three initial treatments and possibly more. Another reason some companies require their clients to return every year for a touchup and, eventually a complete reapplication, is that the pigments eventually fade away. (Please view the detailed video of why multi-sessions are needed on the home page Multi-Sessions Are Not the Best Choice.) In addition, our blog article entitled Scalp Micropigmentation Multi-Session Facts will also give more insight on why multi-session methods should be avoided.

The patented Weston needle is based on a 3 round needle configuration, but is comprised of much smaller three micro pins pulled together, creating a small cup at the point. The exterior diameter size is very close to that of a single needle, but in fact, the inside diameter of this needle is smaller. This design allows a point the size of a hair follicle, but at the same time implanting sufficient pigment into the scalp for permanency.

Despite criticism from some competitors that the size of needles doesn’t matter, nothing could be further from the truth. A smaller needle in this configuration does in fact produce better results, and results in a permanent and one-time application, saving the client time, money and the hassles of multi-session appointments.

The Weston Difference #2: Patented Specific Method For Using The Needles 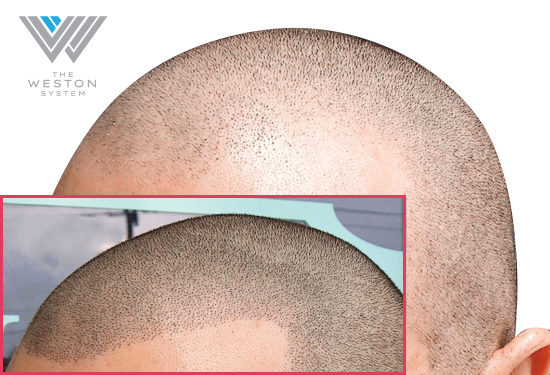 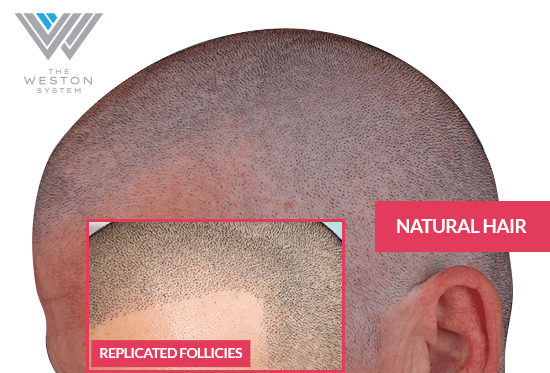 Weston’s application methodology meticulously replicates frontal hairlines (forelock), the mid-scalp, the vertex and crown. A soft frontal hairline is enabled by graduation of replicated density and a non-symmetrical pattern. Locating and replicating the original natural hairline is of utmost importance to avoid the edged-up “cloned” look that so many multi-session providers provide.

This patented application method results in true-life hair follicle replication by encompassing proper hand and arm position, muscle control, angle of insertion on different areas of the scalp, proper needle depth and proximity of replicated follicular unit points. Points are precisely placed at a slow and meticulous pace to permit complete control of the application depth and not just random banging of the needle at a high-speed pace with no control. (This may be seen in many of the multi-session company videos).

This specific application method also contributes to the permanency of the pigments.

The Weston Difference #3: SMART Pigments® Engineered For The Scalp Only 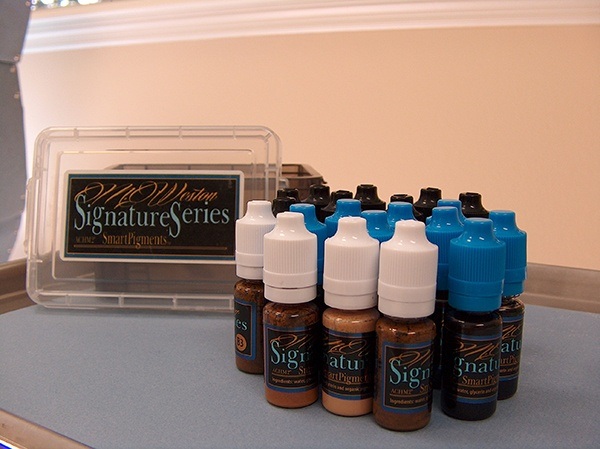 No two hair colors are exactly the same. Mark Weston specifically researched and developed colored base pigments formulated to be counter-mixed into hundreds of custom colors to match any existing hair color. These pigments were designed for permanency, but were also engineered to naturally blend, should your own hair start to gray in later years. These SMART Pigments® are not only organic, but they are completely vegan, containing no animal by-products either in the carriers or the base pigments.

BELOW IS A SMALL SAMPLING OF OUR MORE COMMON HAIR COLORS

Please notice that in all of the examples below, the eyebrow colors were exactly matched. This is because, in most cases, the eyebrow color is the man’s natural scalp hair color. Having a unified gray scalp with different colored eyebrows creates a look that is unnatural in appearance.

The Weston Difference #4: One Appointment Only Permanent Application – No Multi-Sessions

Needle size and configuration, application method and permanent pigments have all been engineered by Weston to result in a one-appointment only permanent application. The Weston System® scalp micropigmentation is completed in just one day – not over a period of 4 to 6 week, and in numerous sessions like other cosmetic head tattoo companies require. With The Weston System, there are no added expenses for missed work, travel and other related costs as associated with multi-session applications. Please read our blog article, Scalp Micropigmentation Multi-Sessions Facts. Furthermore, our clients are not subjected to scarring from repeated applications that may hinder a person from any additional hair replacement technology.

Some companies claim that numerous sessions are required in order to achieve a natural 3-D effect by adding different shades in each session. The Weston System successfully achieves this effect by integrating various shades of colors during our one-application method.

This photo to the left is the result of an eyebrow that was repeatedly pigmented. You can notice the excessive raised scarring. This type of scarring can eventually happen to one’s scalp with repeated applications. The scalp will also cease to readily accept pigment if it is scarred. With The Weston System, trauma to the scalp is avoided.

The Weston System only replicates and replaces the lost natural hairline. We don’t create hairlines that are unnatural to the face. For instance, many companies promote the very sharp and straight look known as the “edged-up” hairline. If you are an African-American man, this is natural and can be very appealing. But on a Caucasian man, sharp temples that protrude forward and evenly with the eyes are unnatural. This method certainly is not attractive for men over the age of 35. In addition, the widow’s peak seems to be another current trend that not everyone was born with, thus it may look odd on some clients.

In our above examples, some natural re-created hairlines can be seen. The key to looking natural is diversity and not having a uniformed gray scalp or an unnatural hairline. It bears repeating – only lost natural hairlines should be recreated. For many hair restoration and scalp tattooing companies, their novice employees haven’t been around long enough to see the results of their “created” hairlines years later.

The reason for natural re-creation is to stay within the scalp skin. This is because pigment takes differently in scalp skin that it does on the forehead/facial skin and the color will not match. It will eventually appear as a stripe around the lower frontal hairline – certainly not a desirable look for anyone. Also, a re-created, unnatural widow’s peaks will later turn into a mismatched triangular spot in the middle of the forehead. The same applies for “edged-up” hairlines.

This man’s hairline was re-created outside of his natural one. While this was a hair transplant, it cannot be stressed enough that pigment must never be applied outside the natural scalp. This man had two head tattoo procedures before coming to us. You can also see that the previous provider’s pigment turned blue. 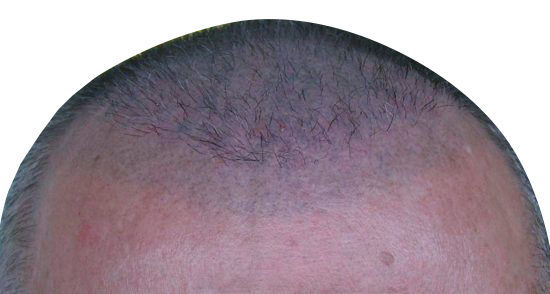 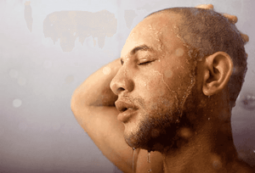 With The Weston System, you can shower
and shampoo your scalp the evening of your application;
no need to wait seven days to shampoo like
the multi-session methods.

After 5 days, you may return to your routine showering schedule. The Weston System does not require a blade/foil razor shave and you are safe to rebuzz your hair in about a week. It can take from two to four weeks for the pigment to cure to its final color.

With multi-session procedures from other companies, the aftercare is entirely different. For three days, you are not permitted to wash your scalp. On day four, some water on your scalp is acceptable, but still no soap or shampoo. This is because there is the danger of washing out the pigment that was minimally placed in the scalp. Finally, on day seven, you are permitted to take a real shower and shampoo your scalp for the first time. And remember, this must be repeated after the second session and third session, etc. Hey, we’re not judging, but that seems to be a long time to go without a real shower. Hopefully, your wife or girlfriend won’t mind… or your friends… or your co-workers.

Facebook
Youtube
Linkedin
Our site uses cookies and other tracking technologies to assist with navigation and your ability to provide feedback, analyze your use of our products and services, assist with our promotional and marketing efforts.OkPrivacy policy